As we get rolling on our "Wild Card" weeks, I have to admit this is something I look forward to with cautious optimism.  A beer that doesn't fit into the traditional style categories runs the risk of being wildly polarizing, so I find it only fitting to start off with a beer from a brewery that causes intense feelings of love and hate among those who imbibe its offerings.  Stone.  The Escondito brewery has drawn the ire of more than one beer geek for bringing obscene ibu's into the limelight.  A good number of their brews are veritable palate wreckers, and purists argue that the more delicate aspects of beer are unable to be appreciated after their hop onslaught.  Well, the good folks at Stone don't care.  In fact, if you feel that way, they'll tell you that they didn't brew that beer for you, and you're a pansy.  They're basically the Harrison Ford of the beer world.  Same expression, no matter what.... 
Stone advertises this beer as Belgian Abbey-ish with a laundry list of spices.  Cinnamon, nutmeg, allspice, sweet orange peel, clove(only a little), and rose-hips   Poured into a LaTrappe goblet, the beer hold up to the claim.  Red-ish brown with a fine laced, one finger head.  The nose sends me reeling, as the aforementioned cacophony of spices punch my nostrils.  The taste is no less overwhelming, as the sweet orange and clove dominate, with the cinnamon and allspice serving to dry out any sweetness from the candi sugar.  As for the yeast, forget about it.  If it's there, it's buried under the avalanche of spice. 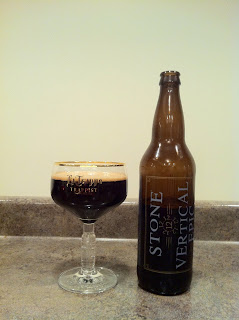 After this beer, I approach the remaining offerings in our "Wild Card" series with trepidation, as it was a massive disappointment.  Not one of Stone's better offerings.