It's a  blistering 17 degress today in the Twin Cities, which makes me glad to have something (hopefully) refreshing to slow the progress of the beads of sweat dripping from my brow.

The saison of choice today is brought to us by the good people at Lift Bridge Brewing.  Farm Girl was the first brew bottled at the Stillwater, MN location, and made quite the name for itself as an easy drinking beer with "broad appeal". 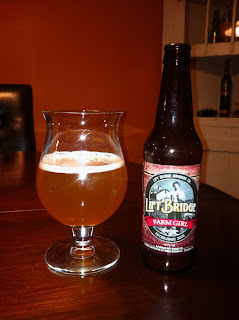 The Farm Girl (whose namesake is apparently the long lost sister of Rosie the Riveter) pours a hazy, yellow-gold with a half finger, soap bubbly head.  The smell is lemon and peaches, a little white pepper, and yeast.  It's a little funky, but I like it.

The first taste makes me think of lemonade, and not the fresh squeezed kind.  I'm talking the powdery, oddly sweet, mildly sour variety.  This is quickly taken over by the yeast, which is pleasantly tart, but lacking complexity.  The aftertaste is bitter, coming from the orange peel instead of the hops.  Not what I expect from a saison.

The mouthfeel here is the real detriment.  It's thin, and doesn't hold up to all the flavors that are trying to make a name for themselves.

Next time, I'll just take the powdered lemonade.  It's easy drinking with broad appeal too.