January 2: Karl and the Tale of the Silly Saison 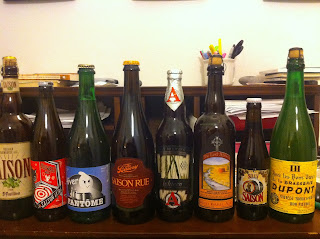 Preface: As we were preparing for this year-long journey, we decided that we wanted to have direction each week for our imbibing. We figured this would give us some talking points between us as friends while helping us refine our palates; drinking similar styles and sharing notes, passing along recommendations and the like. The real question was, where do we start our journey? Well, dear reader, that’s where things get interesting. One of my personal favorite seasonal beers is a winter seasonal- Saison DuPont’s Avec Les Bons Voeux, which is the brewery bestowing their best wishes upon us for the new year, and I thought that was the right spirit to start us off. We thought it would be better to save the Christmas beers for the finish line, so that left us with a delicious saison as our first beer of choice. Also on our minds was the fact that one of our team’s favorite breweries, The Bruery, just had its Saison Rue named the beer of the year by Wine Spectator… so saisons it is! All four of us will be drinking the two aforementioned beers together, and we will be continuing these weekly/bi-weekly themes throughout our voyage du biere, so hold on tight and feel free to drink along and discuss with us. The more the merrier.

Trevor, a cold weather dweller, pointed out that the saison was not necessarily the best “winter warmer”, and I would agree. That being said, winter is the brewing season for saisons (traditionally released in the spring) and I just returned to California from the frigid northeast. A saison works perfectly for me as the 60 degree temperature change from the snow-insulated weather abyss that is Upstate New York by means of transcontinental flight is the closest thing I get to spring in the sunny land of no seasons. I regret nothing.  Alas, in respect to Trevor and Walker’s plight, I chose a particularly well-named beer to start off: the Silly Saison. 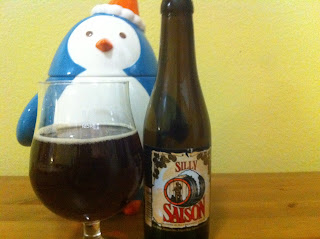 Penguin Man Maroney is not impressed...

Hailing from the hilariously named town of Silly in Belgium, Silly Saison is representative of its name in every way. From the pour, which yields a clear, dark reddish-brown liquid with a blink-and-you-miss-it half-fingered head, to the cherry-soaked nose, nothing about this beer seems to say “I’m a saison”, which is silly, because it’s supposed to BE a saison. Get it? It’s silly. The cherries on the nose unfortunately follow the beer to the mouth, offering a slippery beer with amber-ish characteristics, plus cherries. It tastes like I drank an Amstel after sucking on a Luden’s cough drop, but less interesting and less throat-soothing. There is no funk or character, it is too refined for a saison, and all of these characteristics add up to make a thoroughly uninteresting beer. It’s kind of like a bad, late 80’s movie theme: seems like it should be fun, but instead it’s just sterile, mass-producedy and, looking back, slightly fruity. Not undrinkable, but I would not recommend nor would I purchase again. Silly beer.

Deleted Top Gun Scene: Maverick, Iceman, Goose and Slider went back and downed some Silly Saisons with Loggins after flexing some more in the locker room. And side side note: it was really difficult to choose between the Top Gun scenes and the actual Loggins video, which includes a bunch of hot, young, go-go 80s Reagan-nauts playing volleyball indoors. In the end, I had to go with the one that had Val Kilmer in it.